Member of the month

The author association Uppsala Författarsällskap picked me as the member of the month for January. Read the interview here (in Swedish):

Watch my film A Kiss here

Distribution deal for A Kiss

The award-winning short film A Kiss will be distributed through UK-based ShortsTV. The three-year deal struck in early October covers Europe, the Middle East and Africa, and North America.

Salvaged Love (Bärgad kärlek) has been selected by the Uppsala International Short Film Festival as one of the region’s best films of 2020.

A Kiss selected to West Sound

The short film A kiss is selected by the West Sound Film Festival in Washington, US (former Port Orchard) to be screened in August. This is the second time a Nadasy production has been chosen by the festival.

…or not. A Kiss is screened in beautiful Ojai at the Short Film Festival in California on December 14 and 15 at The Ojai Retreat & Inn from 11am 4pm.

The students had drawn beautiful pictures from the book, asked me some great questions and they all wrote ideas for a book number two. Thank you!

A Kiss goes to India

My first author’s visit for Semla was at Saltängen school in Stockholm.

Over 30 school children gathered today to hear the backstory to Semla. They peppered me with questions about writing, characterisation, storytelling, and other things too. It was a wonderful opportunity to meet my readers.

Very proud to have my next screening of A Kiss at Abuja International Film Festival in Nigeria.

Congratulations and – as always – kisses to my team. 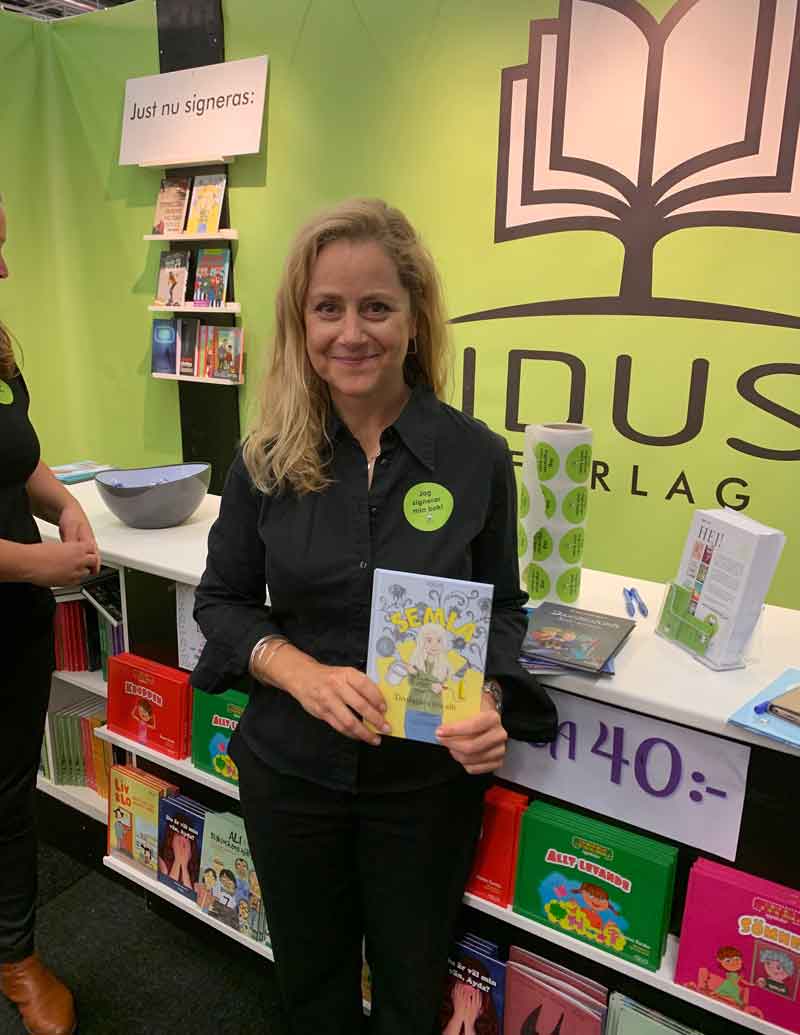 Publisher Idus had arranged a nice, warmly space which invited many interesting conversations about stories and the trade.

Sold out when En Kyss (A Kiss) was screened together with the wonderful shorts Stroke at Midnight and Ett Sista Farväl att the independent Stockholm cinema Zita. 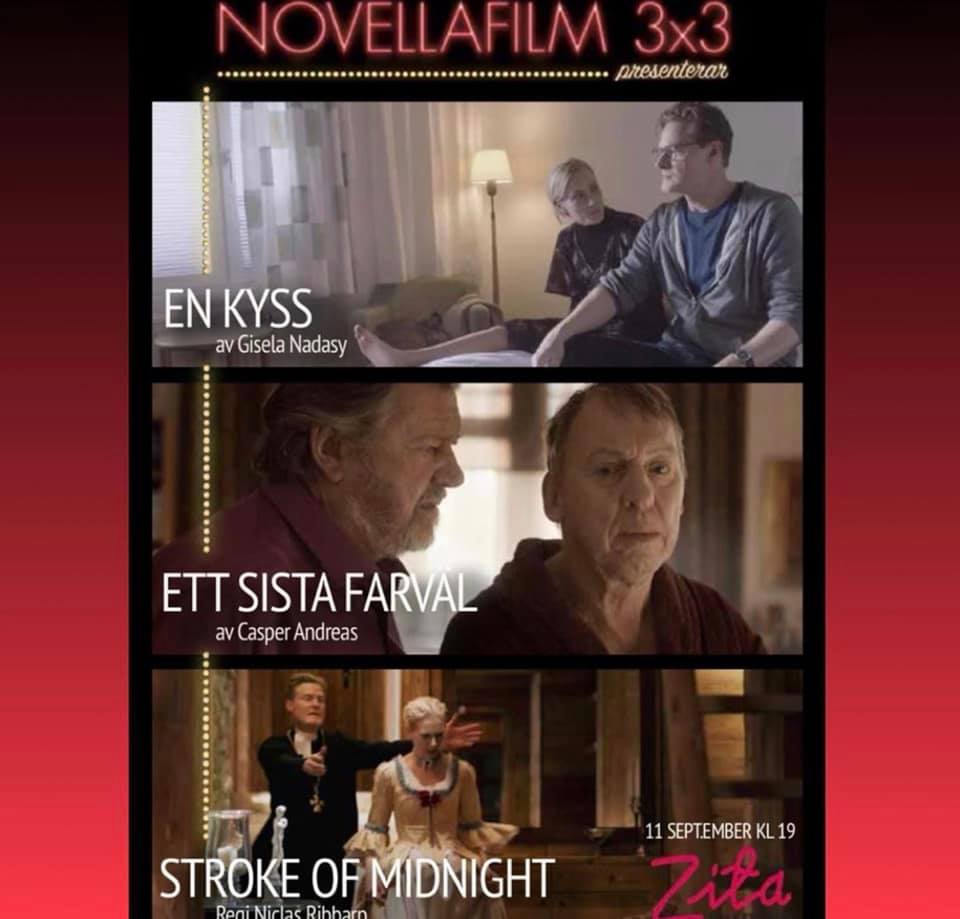 The screening was followed by a Q&A together with talented filmmakers Casper Andreas and Niclas Ribbarp.

A Kiss to Live at Heart

The Örebro Film and Music Festival Live at Heart screened A Kiss twice in the short film section What is Love.

Yet another award for A Kiss..

A Kiss received the Indie Filmfest Award of Merit in August.

Semla in the bookshop

Distribution deal for After school

A two-year distribution deal has been signed with Largos Film to show After School (Efter skolan) on Sofy.tv.

Watch After School it here

Semla out now in Swedish 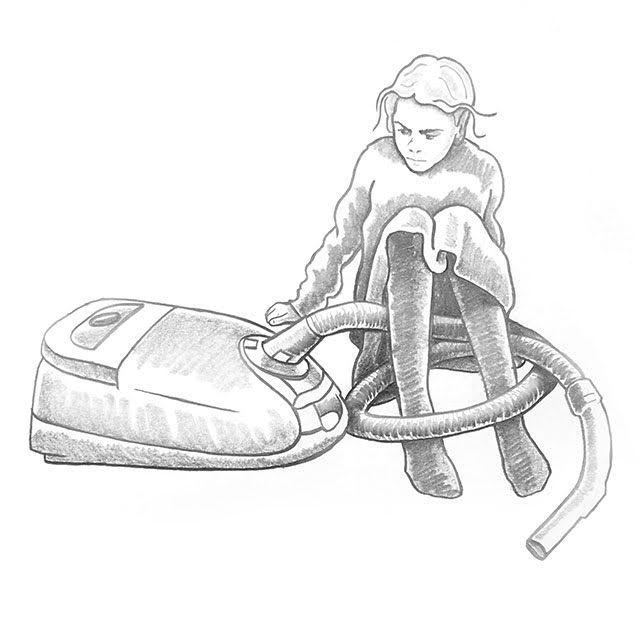 My children’s book Semla – Tio dagar extra allt, is available to order online and out in bookshops from 4 July.

The story about a young girl struggling to come to terms with her sister leaving home is based on an original idea for a TV series pitched at the children’s film festival BUFF in Malmö. It is written for 6- to 9-year-olds, but older children might enjoy it too.

Semla is published by Idus Förlag and features fabulous illustrations by Peter Lakowitz. Thanks also to my team of proofreaders Mikaela Hincks, Gabrielle Sjöstedt and Anna Sundelin.

It was a pleasure to sit on the jury for the FOCUS Film Festival in Uppsala together with filmmaker Gustav Skogens and festival producer Sigrid Hadenius. 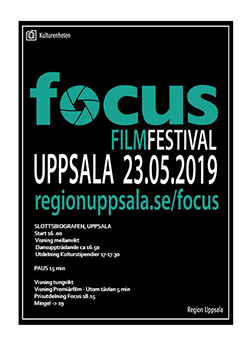 After having watched several excellent short films during this past week, we came to the same conclusion that this year’s winners are in the Catagory Tungvikt: Inte riktigt en våldtäkt and in the Category Mellanvikt: Kids Looking for Attention.

Honourable Mention for A Kiss

A kiss won an Honourable Mention at Sunderland Shorts 2019. Festival Director Anne Tye, says: ”It was very well received by our audience and was a very close runner up.”

Wonderful actress Sara Lewerth starring in A Kiss has been nominated one of the prestigious Golden Reel Awards at the 2019 Vaughan International Film Festival Award. Best Actress will be announced mid-May.

Screening of A Kiss in Ismailia 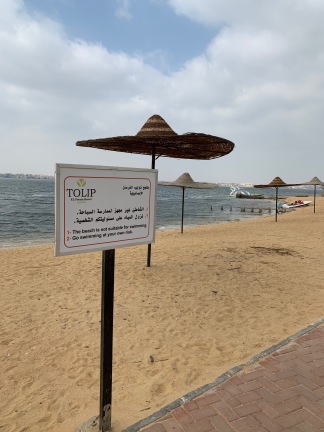 Watching A Kiss in Egypt was a memorable experience. Hat off to the organisers and volunteers at the the 21st Ismailia International Film Festival. The hospitality and service was way and beyond expectations. The seven days were spent travelling between the hotel and the different venues for screenings. A Kiss was screened twice during the week at prime time together with other superb short fiction films.

A Kiss to Sunderland in May

The 2019 Sunderland Short Film Festival has for the second time accepted one of my films. A Kiss will be screened in mid-May. 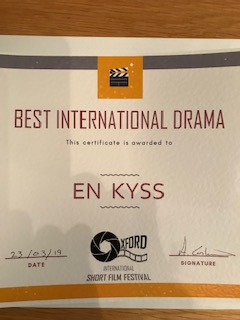 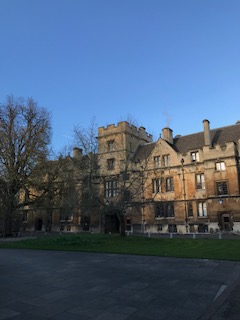 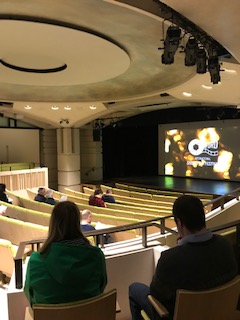 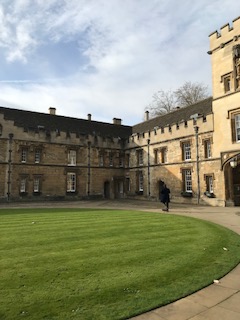 A Kiss was named Best International Drama 2019 at the inaugural Oxford International Short Film Festival on March 23. The festival was held in the beautiful grounds of St John’s College at the University of Oxford in the newly refurbished auditorium. Many thanks to lead actor, Henrik Norman, for taking the supporting role this time round.

Canadian premiere for A Kiss

My third short will screen at the Vaughan International Film Festival in May. Much love and congratulations to my wonderful team.

A Kiss to Egypt

A Kiss has been selected to the 21st edition of Ismailia Film Festival in Egypt. The festival runs between 10-16 April.

UK premiere for A Kiss 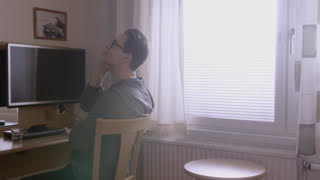 A Kiss has been selected to screen at the Oxford International Film Festival on 23 March. 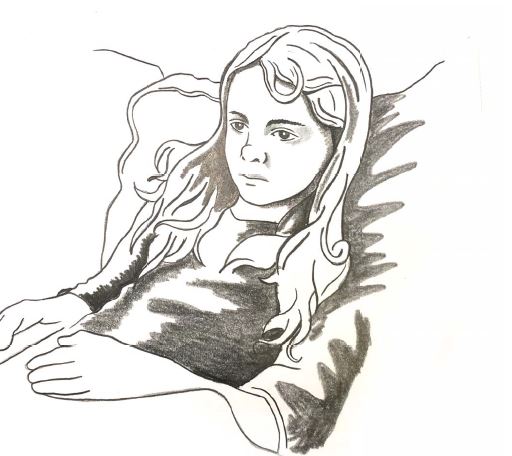 The original screenplay for Semla is going to be published as an illustrated children’s book by Swedish publisher Idus Förlag.

Semla – 10 Days in February is written for six- to nine-year-olds and tells the story of a young girl who does everything in her power to stop her older sister moving away from home.

Told in 10 chapters, it is a book about loving your sister more than anyone else and having parents who hide the truth.

Illustrated by Peter Lakowitz and proofread by Mikaela Hincks, Semla – 10 Days in February is due to be released in autumn 2019.

What a week that was with two successful screenings of A Kiss of at the Uppsala International Film Festival. Once again many thanks to my team, the festival organisers and a wonderful audience.

Premiere of A Kiss in Uppsala 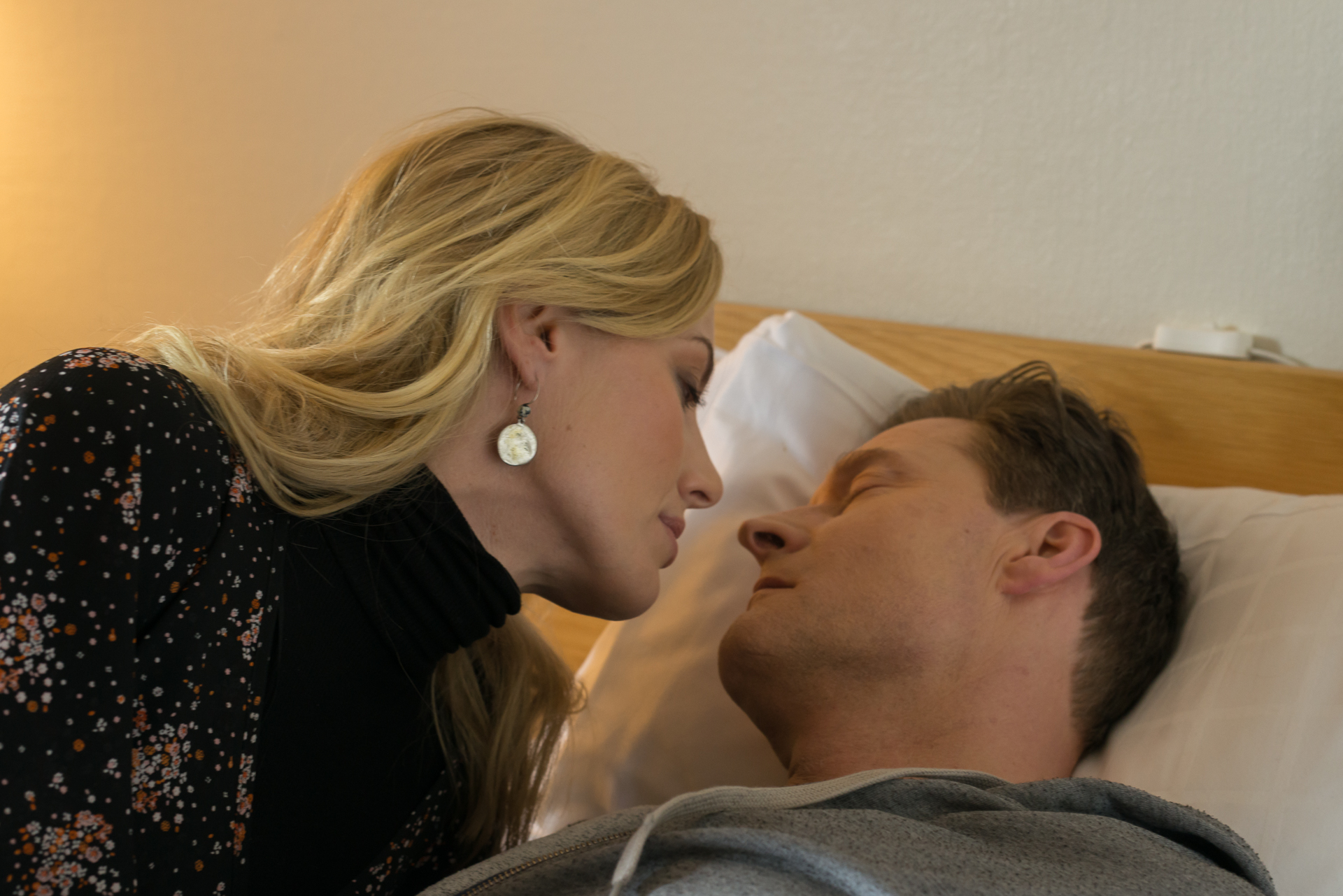 A Kiss will have its first public screening at the Uppsala International Short Film Festival 2018 as one of eight best films produced in the region this year.

On Thursday October 11, I will give a talk on the art of pitching for Kulturenheten – Region Uppsala. I can’t wait to meet other local filmmakers and exchange experiences and tips on one of the most difficult tricks of the trade.

Productive workshop in the wild

Film i Öst’s Archipelago Script Lab was truly inspirational, with a world of energy and talent gathered on one island. Thanks to Soni Jorgensen for an excellent workshop, Film i Öst for arranging it all, and Kulturenheten Uppsala for sponsoring me. Rolling up my sleeves now…

Film i Öst has picked me and nine other screenwriters to take part in a four-day workshop on a remote island off Sweden’s east coast. The scriptwriting lab, led by Soni Jorgensen, is bound to be an adventure all of its own let alone the stories we have to tell. Watch this space.

Distribution deal for After School

International short film distributor and TV channel ShortsTV has bought the broadcasting rights to After School. The three-year non-exclusive deal means ShortsTV is licensed to air After School in Europe, the Middle East, Africa and South Asia.

ShortsTV is the world’s first and only 24/7 HD channel dedicated to short movies.

After School received a warm welcome on the final day of the Sunderland Shorts Film Festival, cheered on by an engaged audience who had escaped the heat for some prime-time comedy before the award ceremony.

After School is going to America!

After School has been officially selected for the 2018 Port Orchard Film Festival. The film will be screened at the Dragonfly Cinema in Port Orchard, Washington, on the weekend of 4-6 May. 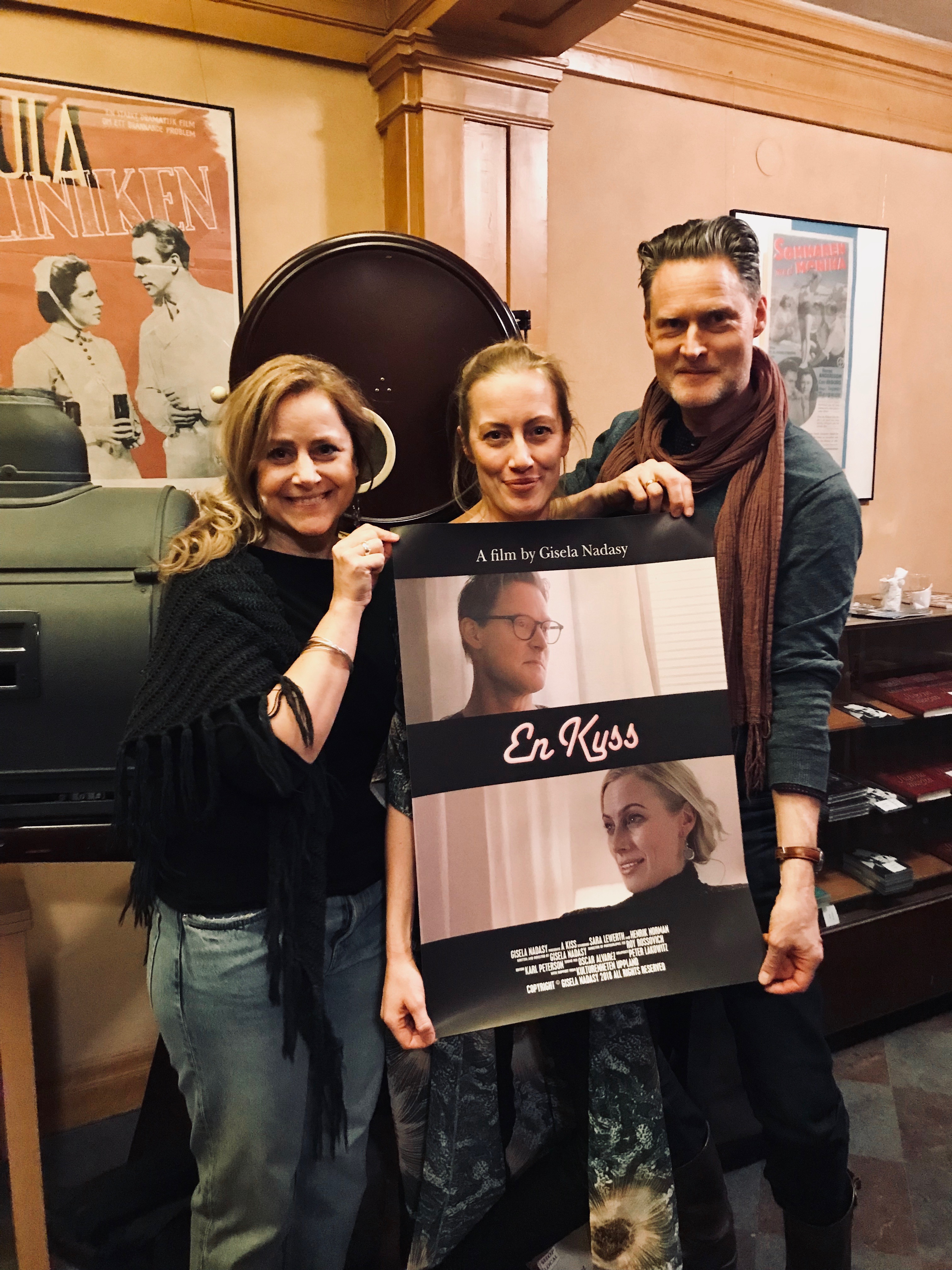 Slottsbiografen rolls out the red carpet

Cast and family and friends alike turned out for the premiere of A Kiss at a closed screening in Slottsbiografen on Monday night. Co-stars Sara Lewerth and Henrik Norman were joined by director of photography Roy Rossovich, sound editor Oskar Álvarez and makeup artist Jenny Guerrero. A great mix of documentary shorts and works in progress played to a full house at the event arranged by Kulturenheten – Region Uppsala. 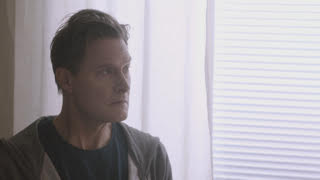 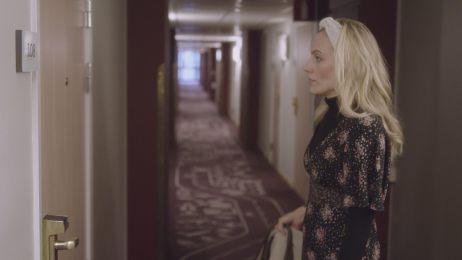 Sneak preview for A Kiss

A year after filming, A Kiss gets its sneak preview at Slottsbiografen on 26 March along with other regional films funded by Kulturenheten – Region Uppsala.

Interview for the newspaper ETC in October 2017 before the kick-off of the Uppsala International Short Film Festival.

Read the article in full. (In Swedish)

I write about relationships and family ties, everyday dramas told with warmth and wit. I have written seven short films, four of which I have also directed and produced, one children’s book and three feature screenplays.